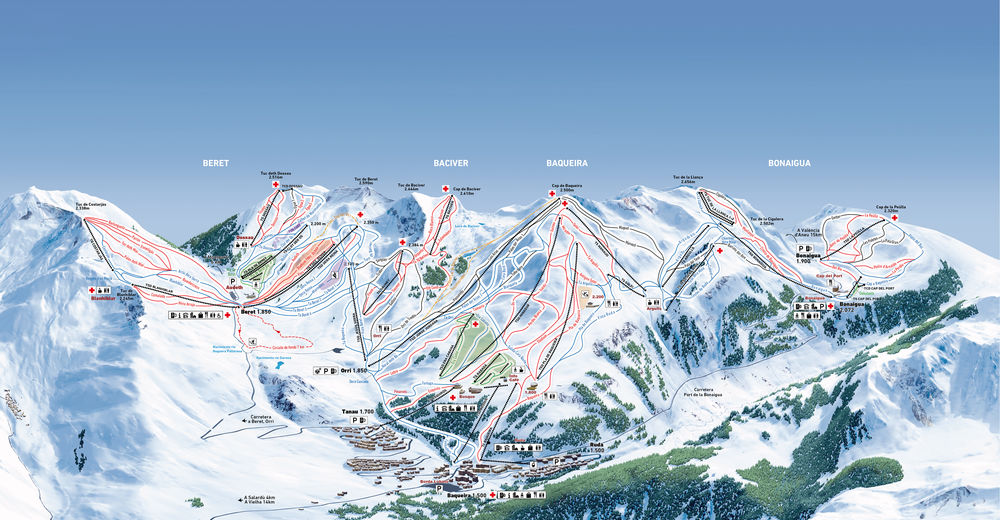 The ski resort of Baqueira Beret is located in the Val d'Aran and Pallars Sobirà (Valls d'Àneu) in the province of Lleida. As part of the Catalan Pyrenees, the largest ski resort in Spain shares space with the only National Park in Catalonia, the Aigüestortes Sant Maurici National Park.

The ski slopes are at an altitude 1500-2510 m above sea level and offer spacious and open plan slopes and runs, partially bordered by forest.

The ski resort of Baqueira Beret, which was founded in the 60s by the local people, is divided into three areas: Baqueira, Beret and Bonaigua. Baqueira-Beret with its westernly orientation is favored due to the weather from the Atlantic and usually has the best snow and slope conditions with 1000 m altitude difference.

Even in summer, the more than 200 lakes (called "Estanys"), and many meanders (called "Aigüestortes") create an area of ​​extraordinary beauty in the Pyrenees. The Aran Valley (Val d'Aran) comprises a total of 33 villages - characterized by the houses of stone and wood and many ancient Romanesque churches - which extend over 9 towns with Viella (Vielha) constitutes the main location.

In the area of ​​Beret, you find the origin of the river Garonne starts its journey towards the Atlantic and the estuary of the Noguera Pallaresa river towards the Mediterranean sea. Among the variety of animal species in the national park area, especially the brown bear and the bearded vultures get the most attention as endangered species. At an altitude of 1000 to 2000 meters, there are the typical of the Pyrenees fir and beech forests, at altitudes around 2,510 meters spruce trees mix up.